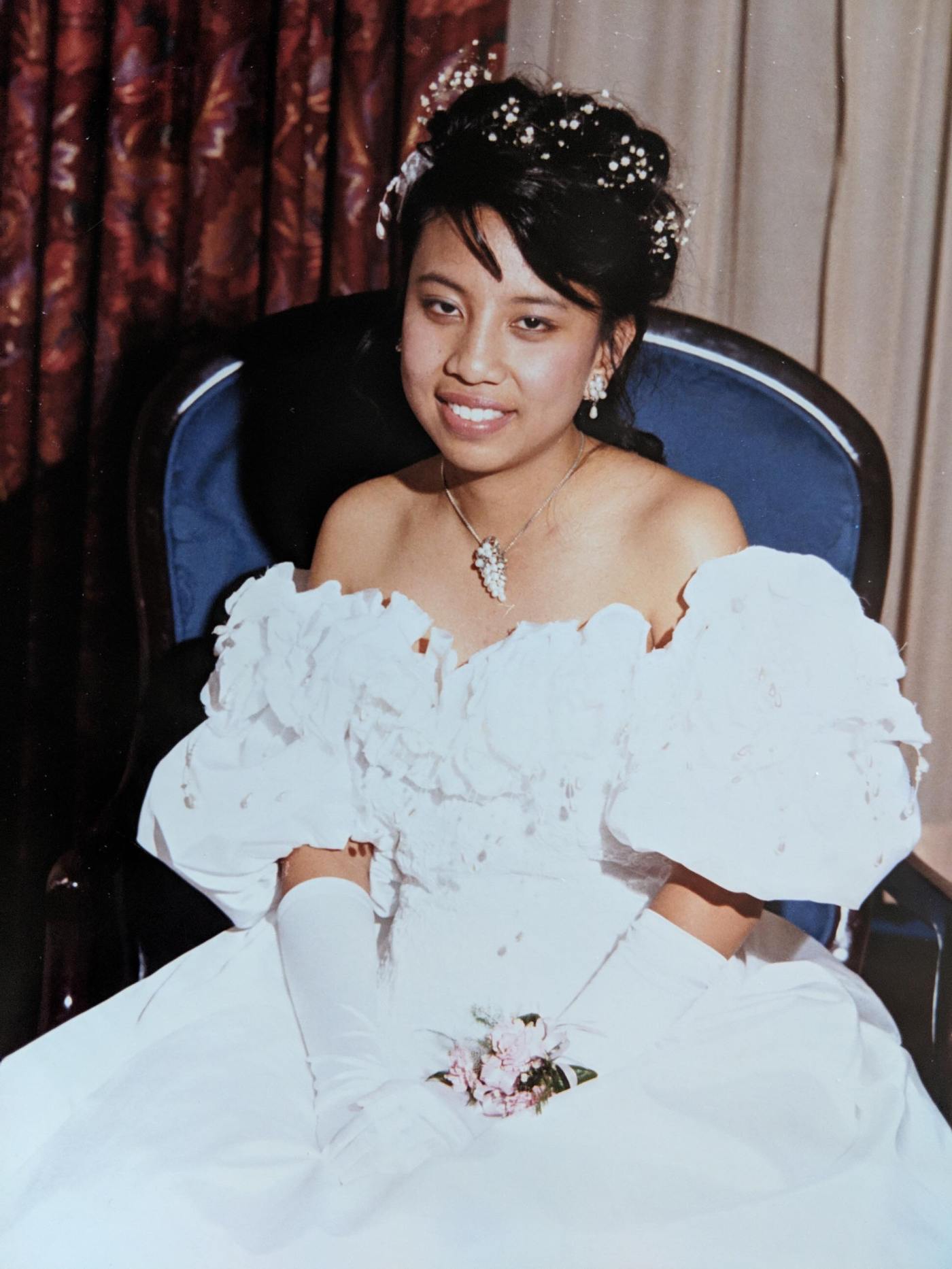 The summer of 1990, between sophomore and junior year in high school.

My parents convinced me to do it. I really didn’t want to.

I thought it was petty and bourgeois, and I would have rather spent my summer doing something else.

Like drinking beers, smoking cigarettes, and going on drives.

This is a Filipino American debutante ball.

This is Michigan, suburban Detroit, where the Filipino community isn’t gigantic but very close.

This is the post-1965 immigrant wave of mostly professionals that made up our community.

In our case, mostly titas and titos, ninangs and ninongs in medicine.

I was reluctant and resisted

But in the end was coerced into participating.

Pick your battles with the Filipino parents

We went to rehearsals a few times a week.

I knew some of the girls there, thankfully.

A good friend from high school.

A few nice ambitious girls I met through her.

Was it my Lola Azon who made my dress?

It was white and floofy.

Puffy sleeves, off the shoulders

And out of my hair.

My mother loaned me matching earrings and a necklace.

(Look at my photo.

When I show my friends this photo now, they say

We had to learn a choreography to classical music.

We were paired up with boy escorts.

I think my escort’s name was Nick.

I can still remember some of the steps of that dance, like the first few steps.

I dare you to ask me.

I was kind of annoyed with Nick

Because there was no bounce to his step.

You’re supposed to sway and bounce.

He was more robotic.

I tried to will him to bounce a little

I’d do exaggerate bounces during rehearsal,

Maybe I started taking it seriously if I got that annoyed with my escort’s dance abilities.

I thought Filipinos were supposed to have rhythm.

(Is that a stereotype?)

At least my parents and their friends did.

They love to dance. More on that later.

I honestly don’t remember what the ball was like.

A blur. Go through the motions.

Happened at some hotel in suburban Detroit.

We took photos, we were shown off, we danced.

How decadent was your white dress and the jewelry you wore?

Who made it? How much did it cost?

How many accomplishments did you list in your program bio?

Where do you want to go to college?

What do you want to major in in college?

If you’re not Pre-Med, then what the hell are you going to study?

Psychology? Sociology? What the hell are those?

Eventually the parents and family members took over the dance floor.

Resplendent in their own suits, tuxes, and dressy dresses.

Colonization via ballroom and line dancing

Happens all the time at Filipino gatherings.

A group of us snuck out.

We were hungry because catered hotel food at these events didn’t fill us up.

So we walked across the street to a restaurant and ordered cheeseburgers and fries and milkshakes.

Everyone stared at us because we looked so formal.

We looked ridiculously out of place.

A bunch of brown teenagers in ball gowns and tuxes

Asking for two large tables in an American diner.

I wore my gloves to the restaurant and had to take them off eat.

We hadn’t changed out of our formal wear

And continue our complex identity performance.

Looking back at that experience…

What was the benefit to me?

Did I learn anything important or unique about my culture?

I learned how to smile while I danced.

I learned how to have fun with my friends

Within the confines of tradition

And critiques of materialism.

But I understand something about maybe why we did it.

Debuts are traditions of those who are well off.

Neither of my parents came from particularly rich families.

They were not the Crazy Rich Filipinos

of the Silent Generation.

I actually don’t know if my mom had a debut when she was growing up in the Philippines.

I doubt it, though.

(I can’t ask her because she’s gone, and so are all her parents and siblings.)

My dad said he was never in one.

Both my parents became doctors

Immigrated to the U.S. for the “better life” trope.

(For their generation to feel trapped by the limited opportunities in the Philippines,

For my generation to feel trapped by their expectations of us.)

I understand something about maybe why we did it.

Unfurl the bootstraps that propelled you into this hotel ballroom

Eat, drink, dance, and celebrate this rite of passage.

I’d like to know how many of my fellow debutantes